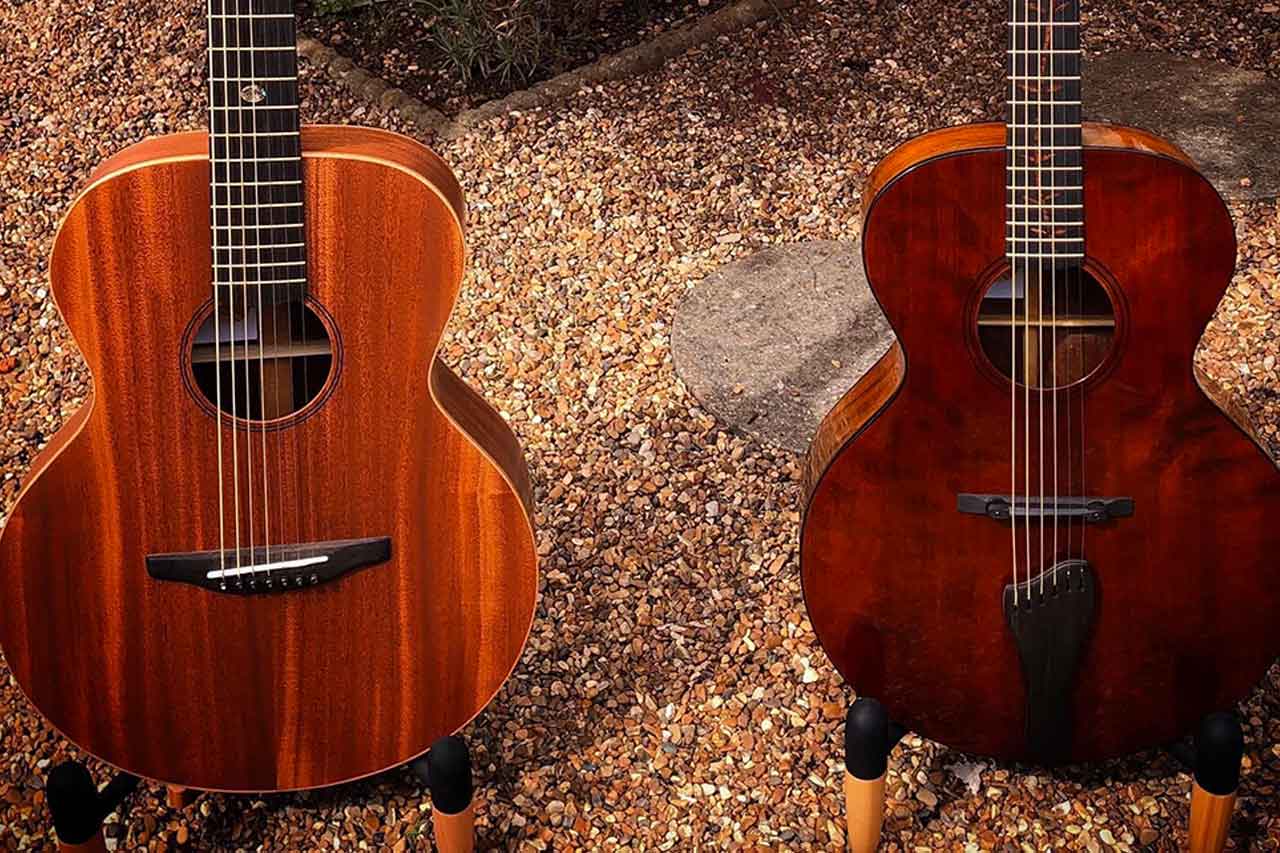 PLAYING: I mainly played in school bands. I was in a 30 piece Jazz Band in my mid-late teens. I played electric bass here. We toured too – Switzerland, Austria and Germany over 3 Summers. It was a great experience! I also played in a 7-piece Traditional Jazz Band called “Norton’s Hot Seven” (named after the school I was at – The Norton Knatchbull). We entered the School’s Proms in 1989 and won! For the final, we got the play The Royal Albert Hall, London! Best gig ever!

LUTHIER YOU ADMIRE THE MOST:  Probably Beau Hannam. I’ve never met him, but have spoken via chat a few times. He’s also got a wicked sense of humour as well as being a luthier who’s happy to share how he does things, which is a good thing.

INSTRUMENT YOU DREAM TO HAVE ONE DAY: I always wanted a Wal bass growing up. I even wrote to them many years ago, asking if they had any jobs going. I distinctively remember their reply. “We are determined to remain small…” I respected that!

LAST SHOW YOU WENT TO : Clive Carroll, at the Stop Cafe!

MOST IMPRESSIVE INSTRUMENT YOU EVER HAD IN HAND: A Greg Smallman classical. I collected a classical guitar from a dealer some years ago and he showed me one of Greg’s guitars he had in for sale. Now, I knew they were quite heavy instruments, due to Greg’s unique building technique, but didn’t realise exactly HOW HEAVY, until Miles let me hold it…. The guitar cost £20,000 and no, I didn’t drop it!

MOST STRANGE RESTORATION OR REPAIR YOU HAD TO DO : I wouldn’t say strange, but I did a repair on a Brian Knowles classical in 2021. I wanted to know more about Brian, as a luthier, but sadly, he was no longer around, having passed away a few months before. However, I managed to track down his daughter (Adele) who was most helpful and gave me a great insight into her late father and his work. She was a lovely lady. It would have been nice to meet him, but alas…

AJ Williams Guitars Interview – Can you tell us what you consider to be the most important thing when you design a guitar ? What is your process of creation and how does it often start?

There are many facets, which are important in the guitars I make.

I have always had this thing for utilising eye-catching woods in most of my guitars. I like the idea of that wow-factor, but the sound and feel is paramount. Nobody is going to want a guitar that doesn’t sound great or is a fight to play. Playability is so important.

AJ Williams Guitars Interview – Can you present us your flagship models ? and your company philosophy ?

My guitars are still developing really, but my favourite model currently, is probably my small jumbo. I like it’s curvaceousness!

At some point, I’d like to make an even smaller one and sit down to re-design things.

As for my philosophy, my instruments are modestly priced and generally modest in aesthetic.

I want my guitars to connect with the player just as a player connects with their audience. It’s an intimate thing…

AJ Williams Guitars Interview – According to you, what is the most impactful thing in the instument sound ? The woods ? the building technique ? what should a buyer ask for when he want to order an instrument when he was to be sure he is ordering the right instrument for him?

In my mind, there is a multitude of elements impacting an instrument’s sound.

Consider a mathematical equation, comprising of X, Y and Z and more – they all play an important part in that equation and getting the mix and proportions right is key.

Every guitar is different, as is every player.

When someone wants me to commission a guitar, we sit down and talk this through. Sometimes, the client may not know exactly what they want right there and then, so starting dialogue is where things develop. It can turn into a thought provoking process.

AJ Williams Guitars Interview – For a custom instrument, can you explain your process? What are your average delays? And how do you advise your customer? What questions do you ask him so that his instrument is perfectly adapted to his expectations?

Typically, I will sit down with the client (or via phone call) to discuss the build, generating a lot of questions.

Firstly, I’ll get them to bring their current “go to” guitar (where possible) and ask them to play me something. This gives me an idea of style of playing, how they play in terms of whether they play lightly, or tend to dig in harder, or have a percussive style.

Then we go through, body shape, scale, dimensions for every aspect (nut, neck width, body depth etc.). Then it’s time to ponder over wood selection and discuss the merits of what choices and combinations of woods.

I also like to offer an element of flexibility in the build process.

In addition to the initial deposit, I ask the client if they have an expectation on when they want to receive the instrument. For example, I had one client who was not in a rush to get the guitar, so once the deposit was paid, we worked out a monthly budget for additional payments, based around the balance and how long they wanted the build to take. It’s a different approach, offering a scaleable flexibility.

Any delays get relayed to the client, but the build time and expectations are typically established during the consultation process. Sometimes, there are more specific things a client wants on a build, like inlays. A previous client required a very specific inlay for the back of the instrument. It was a very personal and heartfelt thing. He had to undergo urgent open heart surgery, a few months before we got to know one another. The inlay reflected this very touching story… below is a few photos of that build.

AJ Williams Guitars Interview – Do you have famous musicians playing on your models ? If so, can you tell us who ??

I’m afraid I don’t, but maybe one day. So, whoever you are and wherever you are, let’s talk!

Luthiers.com brings together luthiers from all over the world. According to you, how is the English lutherie different?

Being from a small island (UK), there are challenges. Sourcing woods and the associated costs for a start. The choice is certainly bigger on a continent, particularly the US. That said, luthiers are starting to embrace homegrown woods. I’ve use English Walnut in a few builds already.

From a build perspective, I think we tend to be a little more conservative on the aesthetics of our instruments. I personally, like things very simple and functional, no bling.

Where can we buy your instruments? Can we try them somewhere? Will you participate to some guitar shows ?

My guitars are typically only available direct from me, although I do have 3 up on Reverb right now!

Moving forward, I’m open to maybe some kind of dealership representation one day. I do have a limited stock of instruments here, to give any prospective owners an insight. All of my instruments are bespoke and individually tailored though.

This year started off as a challenge – I underwent spinal nerve surgery, which took me out of the workshop for a while, but thankfully I’m fixed now! As a result I was unable to plan for any guitar shows, but hopefully they will be back on the radar for next year…

You can contact AJ Williams Guitars
using the contact form on his personal page on Luthiers.com here :