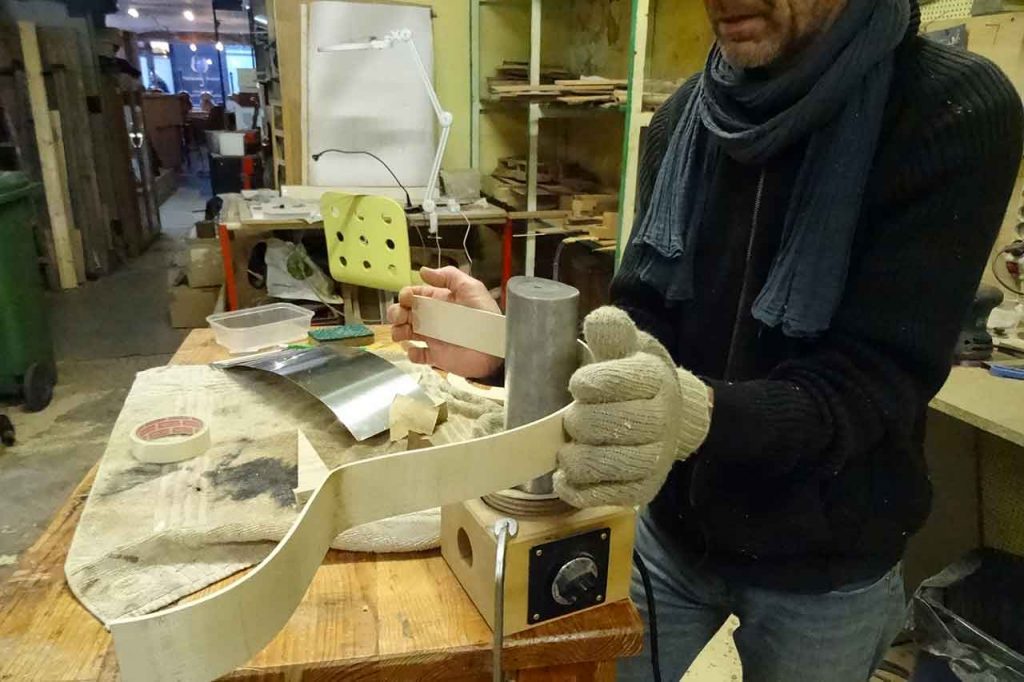 Luthier Hervé Berardet Osiris Model – Hello Hervé,
After having explained your career, can you tell us about your creations ? And in particular OSIRIS: Where does the idea come from? Where does the name come from?

At the beginning, 10 years ago, a client and friend, an enlightened amateur for whom I had made a classical guitar, asked me to make another one that could be taken apart. To take it in the boot of his car.

Finding the idea impossible at first, I then thought about it and proposed his dismountable guitar in 3 parts. It could then fit in a long piece of luggage occupying the bottom of his trunk. In order to be able to play on holiday without waking up his children, I made sure that he could play with headphones.

It was a nice idea, but I kept it under wraps with the desire to go much further.

Mickaël, the friend in question, promised not to show it off too much. And the idea took a long time to come to reality: between the lack of time and the maturation of the idea, it took 10 years.

Every year, Emma, who works with me and is also my wife, would come back to me with a lot of conviction. But the time was never right. From mid-2019, we decided together to move on!

We then imagined making it dismountable in 4 parts this time to put it in carry-on luggage and to go further, to propose it modular…

So we decided to call it Osiris since it was transformable like the legend of Osiris who, after being killed and dismembered by his brother, saw his body reconstituted by his sisters… He came back to life by being different.

To make it more than a guitar maker’s travel guitar, a guitar that is also modular.
Tell us about his lutherie and his innovations in the midst of a pandemic

1) Above all, we wanted to make a guitar without any compromise:

– in terms of its craftsmanship (1/4 body, slightly domed top and back, high quality threading, 3-ply neck),

2) Transportable, as cabin luggage on a plane, and also in a car, on a boat, on a bicycle!

3) And modular because it can be transformed according to one’s desires, both visually and sonically. Having several guitars in one. All the while having an ethical, local and artisanal approach in its realization.

We were thinking of finishing the first stage when the first confinement fell. Doubt seized us for a moment: bringing out a travel guitar at a time when we could no longer travel seemed absurd…

At the same time, it is first of all a luthier’s guitar in ¼ of a body, which happens to be also travel and modular to have several possibilities of sounds (3 different types of pickups) and different visual aesthetics (up to 9).

Little by little, we realised its full significance: it was aptly named in that it symbolised transformations, renewals, determination to survive the whole situation.

And in the end, the confinements allowed us to focus our energy more on the Osiris project. Hard-working, convinced, devoting all our time, energy and spirit to our goal, always 7 days a week, and the nights sometimes with it, often fruitful!

This suspended time allowed us to go to the end of ourselves. To fine-tune the different systems of assembly and disassembly, without using a single tool for the musicians.

And to think more deeply about the different modularities and sounds that the luthier wanted to obtain. Since then, it has evolved: we now offer three central parts with different pickups in three different woods and as many side parts.

Today, it will soon be 2 years and we are still continuing its evolution…

Without going into the secrets of the manufacturing process, here are a few photos of Osiris’ work in progress:

In the end, what does the “Osiris panoply” look like?

The different wood pickups and centrepieces have been designed for different styles: Humbuckers Blues/Jazz/rock, the more rocky P90s (handmade in Bordeaux) and the more jazz Charlie Christian handmade in the UK.

Transportable, we have planned with Luxbag, a company labelled Entreprise du Patrimoine Vivant, (in progress) 2 types of adapted luggage:

Has it been tested?

Yes, we were extraordinarily lucky thanks to the musicians, all from different backgrounds, who were willing to test it to give us their opinions and to show its full-sound palette

It is all the more appreciable since with the confinements and the postponements of shows, it is complicated to come and test it.

So we thank them very much! They are a bit like ambassadors for Osiris, recognized musicians, what luck!

Do you have a conclusion about Osiris? We’ll talk about your other creations in another interview if you like…

Yes, to allow its development, we have launched a pre-sales campaign for 5 Osiris “Signature” guitars in 3 variations, until June 1st:

The videos give you an idea of the sounds and how to handle it, while we are waiting to welcome musicians interested in the Osiris “Signature” from the campaign on 19 May, by appointment…

You can contact Hervé Berardet Luthier
using the contact form on his personal page on Luthiers.com here :