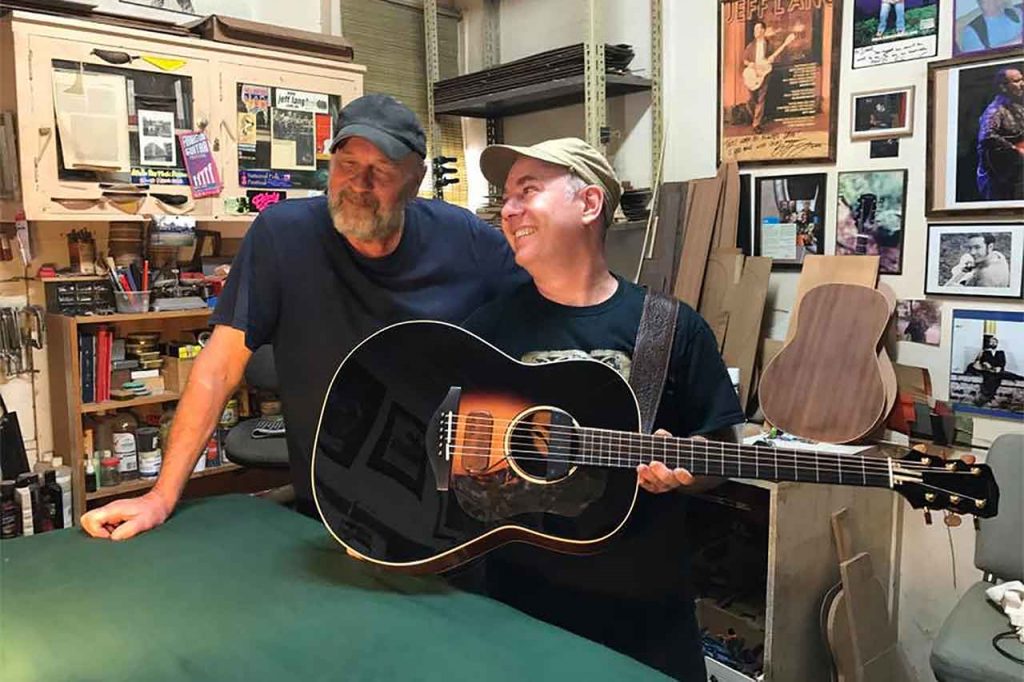 Can you show us your favorite luthiers, and the models they designed for you?

I’ve had a long relationship with David Churchill, it must be around 30 years now that he’s made acoustic instruments for me.

He’s from Ballarat in Victoria, which is about an hour and a half west of Melbourne.

I use his guitars at every solo show. The one I use most of his is a sunburst regular six-string, but he’s made me a 12-string and a pair of acoustic lap steels as well as a fair few six-strings.

His guitars have been a big part of my sound for a long time. I can rely on them to deliver the goods, always.

I have a tri-cone resonator that was made by Greg Beeton in Newcastle, New South Wales.

It’s a great example of that style of instrument, and is my primary instrument when I play with Maru Tarang, a collaboration with Rajasthani musicians. Greg has retired from instrument making.

I think he couldn’t sustain his business with the size of Australia’s population. A shame, as his guitars are superb.

Another guitar that I use with Maru Tarang is a single cone resonator made by Don Morrison in Adelaide, South Australia (https://luthiers.com/listing/donmo-resonator-guitars/)

He calls them Donmo guitars.

It’s in the ballpark of a National, but he has his own thing going on.

The main resonator guitar I use in my solo shows is a Beltona, made by Steve Evans in the UK.

It’s a smaller sized body for that type of guitar – around the size of a Les Paul – but it sounds great nonetheless, and it amplifies really well.

I had him make it to incorporate my particular combination of pickups and internal microphone and it comes up a treat.

I recently made a connection with Ross Coole in Fremantle, Western Australia.

He’s been a great discovery for me, as he’s across many aspects of what I’m interested in with the instrument, both acoustic and electric.

I own a cast-aluminium “frying pan” electric lap steel of Ross’. He was interested in the old Rickenbacker cast aluminium instruments, so he worked out how to make them himself.

He makes the moulds, smelts the metal, pours and casts them as well as making the magnets and winding the pickup. He even made his own machine to charge the magnets.

He has that type of mind that wants to know how things are done and he won’t rest until he gets it right. I had him make me an acoustic lap steel that I’ve been using at solo shows for the past year and a half. He’s currently building me a custom electric lap steel that will have a few design elements that I’ve been wanting for years, so I’m excited about that.

Ross is also working with me on a soundhole pickup for acoustic guitars that will be something wonderful too.

And for amps, do you also turn to custom manufacturers? If yes, which ones?

I have used Alan Kelly in Geelong to maintain and modify my guitar amplifiers for decades now.

He makes amplifiers under the name Almach Amps, and I have two of his amplifiers that are my first ports of call for electric guitar.

There’s a tweed Deluxe-style combo, but my favourite is the Almach Custom 20 combo. It has a single 12” JBL K-120 speaker, octal preamp tubes and a pair of 6L6 power tubes for 20 watts of class A power. The sound of a lap steel through the normal channel of that amplifier is really something. Makes your hair stand on end.

But any guitar sounds incredible through that thing.

And for the pedals, I know that, like all of us, the quest for the ultimate sound means that you often change rigs… where are you in your research? Some effects are still in your favorites today, which ones?

My favourite preamp for acoustic guitar at gigs is the Grace Industries Felix.

It has everything I need – flexible EQ, great sounding clean preamp section, intelligent routing options. It’s the heart of my live rig for the acoustic guitar.

I always use a volume pedal to blend the overdriven part of my sound in with the clean “acoustic” tone (I know it’s not really purely acoustic, but it’s a depiction of the acoustic sound of my guitars), and I’m liking the Xotic 25k volume pedal.

The overdriven sound I get on my acoustic guitars is the result of the stacking of low-gain devices.

After the pickup signal has been bumped up by the preamp it hits the volume pedal, then I’ll have an overdrive pedal before an amp simulator to obtain something like an electric guitar sound from my acoustic. I’m currently using a Simplifier as the amp sim, and the overdrive pedal is a Catalinbread Formula 5.

I use a looping device during shows to create atmospheric sounds, and the one I like best is the Sweet 16 Delay by Maneccolooper Pedals.

I also like the Chase Bliss Blooper and the old Digitech Echo+ 8 second delay is capable of some crazy stuff too.

I have a lot of different fuzz pedals I chose between for electric guitar, both old and new.

My favourite vintage units would be the orange Kay fuzztone, Vox Tone Bender MkII and the Ibanez Wau Wau Fuzz.

I like the Fulltone 69 for the Fuzz Face style. My favourite of the modern fuzz boxes would be the Zvex Fuzz Factory, Catalinbread Karma Sutre, and the Wren and Cuff Box Of War, although my wife nicked that last one for her live setup, so it’s no longer available to me!

Alan Kelly made me a great fuzz that’s sort of in the Fuzz Face ballpark, but with more gain.

In terms of sound and playing comfort, what relationship do you have with your equipment when you compose? Did your instrument makers make it possible for you to compose songs that you probably would not have composed with more “industrial” instruments.

I’m not sure. I sometimes write away from the instrument, and this can be a good way to avoid falling back on habitual playing moves in my songwriting.

We all have little motifs we get stuck on from time to time, and it’s helpful to steer clear of them when writing so all the songs don’t end up sounding the same!

But it’s nice to pick up a great sounding instrument when I DO go to the guitar to work out what I’ve been hearing in my head.

If I’m pulling an idea from an instrument that I use in a song it sometimes comes from a guitar that isn’t actually very comfortable to play.

I have an old Guyatone electric that is a hassle to play, you have to fight it somewhat.

That can push me into areas that I mightn’t have otherwise visited.

Many luthiers whom I met during these 30 last years, although they have visions and characters of their own, always concluded our discussions with the same sentence: “the most beautiful moment for me is to see that my creation will begin to live beautiful moments of life in the hands of musicians…”

I know you are a hard worker, but do you sometimes stop playing, take a break, and, look at the instruments that they designed just for you while becoming aware of the work and from the heart they put in these instruments? What do you feel at that time?

Oh absolutely. I like to have them around me at home, and I never take the instruments I use for granted.

I feel very grateful to have had access to the skills, vision and dedication of the people whose instruments I use for my music.

At soundcheck I’ll sometimes sit and look at the guitars I have with me and thank my lucky stars!

We just mentioned the creation of the instruments, but what about maintenance and repairs? Do you take care of it yourself or do you always call on the services of a luthier?

Some things I can do myself, but others are better in the hands of a pro.

I’m lucky that my preference with setups isn’t too finicky.

So long as the action isn’t too low I’m fine with it being a bit higher or lower due to the weather and whatnot. So I don’t need constant setup work done on my touring guitars.

On the odd occasion I’ve had on the road emergency work required, like from an airline breaking something,

then I’ve had to seek out a luthier in far-flung places to perform emergency surgery.

And when you’re on tour, can you easily find technicians when you have problems or adjustments to make before the next concert? You know, it is far from being the only one, but it is one of the reasons which led me to design the Luthiers.com website 😉 Easily find a technician near his concert date or near home.

This would be a Godsend for a touring musician in that sort of circumstance. I’ve had to do some serious sleuth work to find people at times…

so it would be so helpful to have an online database.

I’m sure you’ve already told them, but compliments never hurt … So, to conclude, what do you mean today to your luthiers, and to your amp and effect technicians, for let them know that you love them and that you think of them often?

Oh, I tell them! I lean on their handiwork at every show, and it doesn’t go unnoticed by me.

I strongly recommend you to order and read the book that Jeff just had edited, a book that every musician, every music lover, and even luthiers should take great pleasure in discovering.

You can also find his records on his bandcamp and on his website.

If you don’t know him yet, I advise you to start with these: Dislocation Blues (with Chris Whitley), Chimeradour, Carried In Mind, You Have To Dig Deep To Bury Daddy, Whatever Makes You Happy, Half Seas Over and all the others too… 😉

I also invite you to follow him on his various social networks:

A live-in-studio clip of “Burnside” from the album “Alone In Bad Company”.
Jeff Lang – voice and guitar / Greg Sheehan – percussion on a cardboard box.